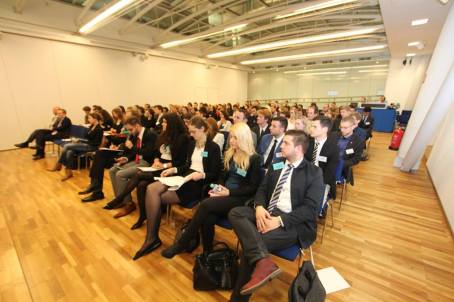 With the Frontex Regulation and the Temporary Workers Directive to be agreed upon in the following days, ‘flexecurity’ (flexibility and security) became the term most often mentioned during the opening ceremony. Of course till the moment, when zombies ‘entered the floor’.

During the opening of the Vienna MEU 2014, the ‘real’ diplomats greeted participants with a few heads-up. Austrian MEP Dr. Eva Lichtenberger mentioned national interests, which lead “to very diplomatic wordings that sometimes no one understands” and added how “frustrating it is if in 6-7 years no agreement is met”. Representative of the Austrian trade union, Dr. Rene Schindler expressed his admiration for the European Parliament: “I would be very glad if Austrian Parliament worked this way”. And later added with regard to the European politics: “It’s personality that sets up what would happen in the next four years. That’s why it’s so interesting – you never know in advance”.

Finally, participants were invited to “simulate the simulation” and have a first session before teaming up in a bar. Since the European Commission has recently published a brief proposal, it was an absolute emergency to discuss it: the Regulation of the European Union on Common Measures against the Zombie Apocalypse.

“We know we can coexist with vampires. Our Romanian colleagues have done so for years,” opened the floor the MEP from Italy. “What I propose, are some general societal measures, like courses on how to kill a zombie with your car”.

“We can’t throw all undead in the same category,” a delegate who introduced himself as MEP from Transylvania responded. “Zombies and vampires have nothing in common. This proposal is very discriminatory.”

The MEP from Denmark appealed to social responsibility: “Why not let the unemployed get a job by fighting the zombies?!” and added “It is a noble job because zombies are slow and vulnerable”. Another delegate added: “We have to consider Halloween. How do we differentiate between people dressed as zombies and vampires and the real ones? Also we should create a Zombie Zoo, which will boost tourism in Europe by attracting visitors from America…”

Unfortunately the debate was interrupted by a reception. Since the directive hasn’t been voted upon,  the press team is deeply concerned over the level of zombie and vampire protection in the European Union.