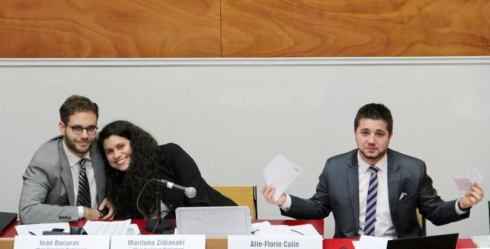 Even though the MEPs and Ministers were extremely busy “deciding Europe”, The JEUrnal initiated a careful investigation, which proved that the Valentine’s Day did take place during the Vienna MEU 2014. As a consequence, we dare to state that love exists. Here are some of the true love confessions, which politicians felt ready to make public:

Minister of Poland loves the minister of Czech Republic, because he supported the right amendment.

Minister of Estonia loves minister of Slovakia for the beautiful blue tie.

Chairs of the Council didn’t notice love, but claimed certain ‘bromance’ between the ministers of Croatia and Cyprus

Minister of Italy loves the MEP Antonovic, because he always has something smart to say.

The ECR faction loves the ECR faction, because it feels like family. Their love is so strong that it also spreads over an MEP from the EPP.

…There was also some love shared on the ‘higher level’ of the conference:

Journalist Eva says that chair Ioan loves chair Marilena. However both refused to provide any comments.

Nadine loves Johanna “because she lights my fire”

The JEUrnal feels entitled to assume that all the ministers, MEPs, journalists, factions, chairs and organizers affected by all this love will live happily ever after.