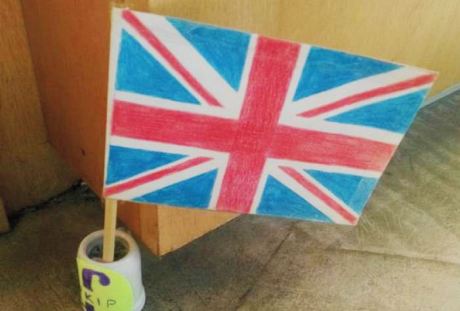 Attention dear ministers and parliamentarians! Someone among you doesn’t seem to comply with E.U. rules and procedures. Let’s get to know Tommaso Marangoni, an EFD parliamentarian of UK, who was interviewed yesterday.

Journalist: There was an episode in the parliament because of the flag that you put οn your bench during a parliamentarian session. Could you tell us what were the reasons?

Marangoni: I believe that nations should be represented in the European Union. As an EFD parliamentarian of UK I think that they are undervalued.

Journalist: European Union is a greater nation. Why do you see it as a threat?

Marangoni: I am aware of that. But as a member of EFD I support the history and the values of my country, something that the Social Democrats were making fun of. My party is for democracy and freedom of expression within the European Union. Everybody should be allowed to express their national pride.

I have request from the Social Democrats. Please, don’t mess with EFDs. Next time they may appear at the parliament in national uniforms.

But who denounced Mr. Marangoni, since the flag was ‘’invisible’’ for almost two hours? Surprise! It was Mr. Kovac, who has a little past in denouncement, since he had done something similar during MEU Sofia 2014. Watch yourselves people!

But the story did not end here. Tommaso Marangoni seems to be very outspoken today as well, as he let the English anthem be played during the roll call earlier this morning. Oops! Dear chairs, there is a naughty kid around here.