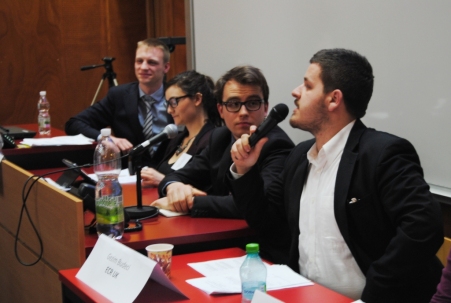 “MEPs said after the last press conference they want to see more female ministers – there you go,” opened the floor Czech minister. German minister claimed to be very satisfied: “The debate wasn’t this heated, but when it came to amendments the biggest member states – UK, France and Germany – blocked them.” The minister expressed hope that the directive will also be “well received in the EP.”

All ministers referred to the ‘Greece problem’: “Greek position we did not understand,” said the Czech minister. Some amendments, according to Lithuanian minister, “were amusing,” such as “5 EUR cost per data request” or Ireland and UK proposing English to be used “everywhere.” Phew, clearly MEU avoided that one.

“We love you guys, thank you”.

“We totally oppose directives. We don’t need more of them,” stated MEP from ECR, UK. “We have stability within our economy and other countries can reach it without Europe as well.” Instead of introducing a gender quota, the MEP offered countries liberal economy and subsidies from the UK to fix the gender balance.

“We were really happy that sex was changed to gender,” said representative of Greens. The debate on sex-gender proved to be very heated in the EP. And was expected to raise the temperature in the Council as well. MEP from ALDE calmly expressed the “hope that Council won’t have any problems with it,” however was reluctant to offer ‘subsidies.’

Both ministers and MEPs seemed to be united in their diversity. “In some larger fractions there were divisions, but that is not our problem,” concluded the MEP from ALDE.