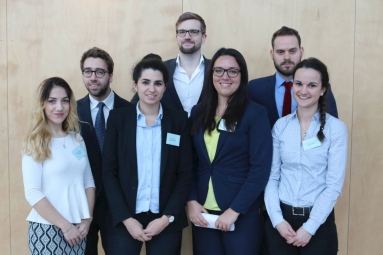 While most faction leaders come across as talkative to the press, and thus to the public, the S&D seems to isolate itself today. “We want to concentrate on the young people. It should become socially unacceptable to smoke”, said one MEP today and suggests harmonisation of the rules on a European Level.

The ECR seems to care a lot about the market – “we are concerned about health, but this union is about freedom. This regulation infringes the freedom of the market”, as one representative said, faction leader Lea Poórová also wants to do a lot for women and stands for a new kind of conservative feminism: “I am a feminist, also: 50% of my party are women”, she said to The jEUrnal.

Thomas Buocz, faction leader of the EPP describes himself as a feminist – “A religious one. I believe in god and I believe in equality”, he stated. Also, it seems, he believes in the equality of needs and rights of the tobacco industry and tobacco consumers. “People already know that smoking harms. But it’s also important to build bridges between different interests. The people of the EU need health but we also need the industry. We are one people.”

When asked, what kind of leader the EoN (Europe of Nations) needs and has elected, Nikoleta Dimitrova replied: “I am a challenging leader. I am not afraid and I think what gives me advantage, is that I have trust in my people.” Dimitrova also believes, that at some point the other parties will start to support EoN. “We need radical change in the system. We need a new kind of constitution.” She wants to support women, but “I am not a feminist”, she added. The people’s “right to choose to smoke must be respected. It’s their right to choose to smoke and it’s not for sure that they will die from that.”

GLE – a faction for old people?

Since the Greens, NGL and ALDE merged and call themselves GLE (Green Liberals of Europe) there is a new, strong alliance in the European Parliament. So far it looks like Lasse Boysen, the former faction leader of ALDE is going to take the lead. “I am an egalitarian”, Boysen said to the jEUrnal without specifying what that is supposed to mean. (Note from The jEUrnal: The former faction leaders of the Greens and NGL, Sarah Farouk and Susanne Schmuck, are not active in this function any more.)

“I honestly don’t have words for that”, commented Poórová. “They don’t have one thing in common and the were never cooperative.” GLE now consists of 13 members and therefore is “the second largest faction in the EP”, MEP Ionel Chirodea stated. “We merged, because we think that together we have more power”, the former member of NGL added. Also, GLE will back “old people” to the centre of the debates. “We want to be the new voice for old people.”