Thursday’s mock debate at the house of the EU focused on a fictional proposal. To help the participants getting started, a story about the US-President “Ronald Grump” gave the base for the first debate. Divided by different positions, the factions had an intense start. Is there a link to today’s discussion in the EP? 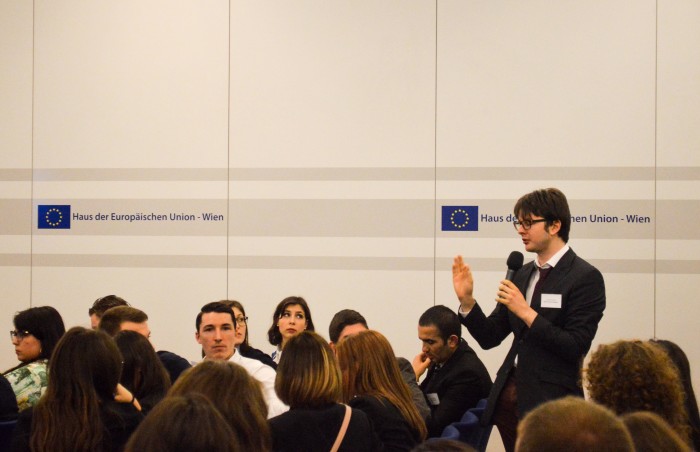 In the last months, international politics were influenced by Americas change of power. The new president of the U.S. Donald Trump made some tough decisions regarding immigration and international collaborations. People with double state memberships were banned from entering the U.S. and even America’s role in the NATO wasn’t that certain anymore. The fictional story used in the mock debate was a metaphorical example on that situation. “Ronald Grump” tries to “make America tasty again” by forcing the fast-food-chain “McRonalds” to include American workers in their European franchises.

After the proposal of this amendment, the European parliament at MEU Vienna commenced its discussion. First on the general speakers list was a Portuguese MP of GUE/NGL. All the other factions presented their positions, whereas the British MP of EFDD spoke up twice, presenting their general support and at the same time underlining the rejection of the usage of EU budget. The socialist and democrat faction (S&D) formulated general doubts regarding the way the amendment was proposed, emphasizing possible dangers for social rights. However, other factions came out divided, showing the fractured situation in the EP. The emotional involvement of the faction speakers was clearly present, showing tensed feelings on the topic. In the end, despite American threats of a trade embargo, the proposed amendments were declined. And even in today’s discussion on the natural gas transmission regulations attitudes are mixed.

Julina Suchanková, Spanish member of the GUE/NGL, pointed out that the situation on today’s debate might haven’t changed much. “Our fraction is still divided on that topic”, she stated. “On the one hand, we’re trying to promote the interests of European citizens in need, on the other one, instead, we don’t want the large energy companies to get a bigger piece of cake”. With this position they pose a contrast to the EPP’s Position which underlines the possible growth of competition on the market. Total disfavor concerning the proposal was also shown by the S&D fraction. MP member Marit Joost from Austria stated in advance that “affecting energy policy and steps made in the field of European Union and Russia relations can be considered a two-bladed sword”. Furthermore, she pointed out that this might not lead to a “desirable outcome”.

All this shall point out how difficult it is to find a unite conclusion in the Model European Parliament today, giving the participants a general idea of the complexity of Strasbourg’s daily routine.